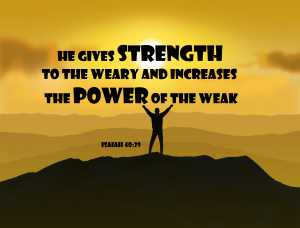 By the world’s standards, would you be considered a “nobody”?  Most of us are not rich or famous, but those are the qualities the world says makes you a “somebody”.  We often measure our value through comparison to others.   We are constantly comparing beauty, finances, family, and other details of our lives with what we perceive to be the ideal life. More often than not, we fall short and find ourselves feeling unimportant.

1 Corinthians 1:26-29 demonstrates that the complete opposite is true in God’s eyes.  Verse 26  says, “Think of what you were when you were called.”  In other words think about your life before salvation.  It continues with:  Not many of you were wise by human standards; not many were influential; not many were of noble birth.  Does this sound familiar? Before salvation most of us were considered a “nobody” by human standards.

Here’s the good part for us “nobodies”.  Verse 27-29, But God chose the foolish things of the world to shame the wise; God chose the weak things of the world to shame the strong.  He chose the lowly things of this world and the despised things – and the things that are not – to nullify the things that are, so that no one may boast before him.  Foolish, weak, lowly, despised…those are not exactly qualities that the world looks highly on!  God chose those who are not perfectly wise and strong, but those who are real.  I don’t know about you, but this is encouraging to me because I have spent so much of my life trying to be perfect.  Trying to appear wiser and stronger than I feel.  But God chooses to use all of the things that I am not instead of the things I simply try to be.  God chose me just as He created me to be, and God chose you!

Do you ever feel that you are less of a Christian than others?  We often wonder why others have more faith or why some people seem to have it all together while we struggle daily.  Satan thrives on those insecurities and self-doubts and convinces us that we have less to offer God than others.  Satan assures us that we are “nobody” and could never accomplish what Moses and so many others have done before us.  But God did not create all of us to be Moses.  He wants you to be the person he created you to be.  He has a special plan just for you.  God chose you to be you!

Romans 14:12 says, “So then each of us will give an account of himself to God.”  One day we will be held accountable for our actions.  The things we did and didn’t do.  God does not expect you to accomplish all that Moses did.  He only expects you to accomplish what He has equipped you and only you to accomplish.  Be the best you can be!  Believe that God loves you and will provide all that is necessary to be the you that He created you to be.  When you hear a voice telling you that you can’t, ignore it.  It’s only the devil trying to stop what God wants to accomplish through you.

He gives strength to the weary and increases the power of the weak – Isaiah 40:29.  We may be weak, but we can trust that God will supply all the strength we need.  David was only a boy, but God gave him the strength to defeat a giant.  You may be a “nobody” in the eyes of the world, but in God’s eyes we are all “somebody”.

God chose us!  No matter your weakness or insecurities, God chose you.